This is why Noggings are your friend...

Let's face it, nobody likes putting in noggings, but here are some facts as to why they are your friend:
(1) they can prevent uneven board set joints as they prevent rotation of the steel studs during lining
(2) they can save you time as they stiffen the wall and speed up lining installation and;
(3) they stregthen the wall studs and allow them to carry additional load, without having to go to heavier gauge steel studs.

DEFLECTION HEADS AND THE EXTRA NOGGING TRACK?
Deflection heads are generally required for two reasons:
a. thermal expansion of the studs under fire conditions and;
b. allowance for structure movement.

Did you know, Steel will expand at the rate of approximately 1.3mm/m per 100°C change in temperature. Imagine a wall, say 4m high subject to a 200°C increase in temperature during a fire, this would result in a 10.4mm increase in the length of the stud. This expansion needs to occur somewhere, otherwise the studs will fail prematurely. 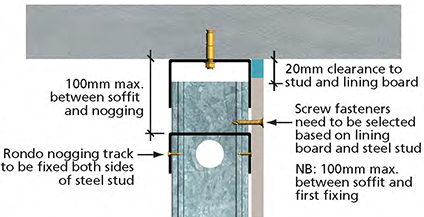 Similarly, all buildings are designed to deflect under load. Floor slabs are allowed to deflect up to Span/500 incrementally over their life. For a column setout of say 6.0m, this is an allowable deflection of 12mm. The partitions need to make allowance for this movement, and does so through the Deflection Head installation.

That 20mm gap at the head of the wall, put simply, is their to maintain passive fire protection (where necessary) and allow for "normal" building movement. The necessity for the gap is generally not related to the wall framing, rather the structure to which it is attached to, and its expected movement.

The insertion of the nogging track 100mm below the critical point provides what is known as torsional restraint to the wall studs.

That is, it stiffens the wall studs at that point to reduce the chance of the wall studs rotating and causing premature failure, which results in reductions in the allowable wall heights for the stud configuration. Omission of the nogging at the head track can potentially cause cracking of the wall linings or other more serious problems.

That’s why in a nutshell, but most importantly, the Rondo Wall Height Tables are based on the practice of the extra Nogging Track being installed.

So in order to be backed by the Rondo Warranty, our construction methods listed in our Professional Manual must be followed (see pages 86-87).